Technology and Relationships: The End-Game 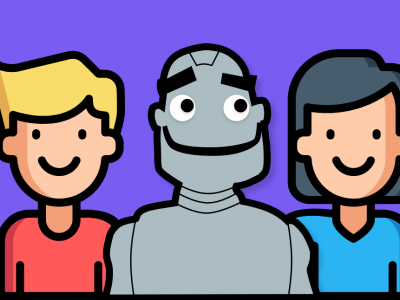 is the CEO of 4Degrees, a Chicago-based technology company, building relationship intelligence software for relationship driven industries. Before 4Degrees, he was an investor at Pritzker Group, and a consultant at Bain & Company.
An exploration of the potential good and bad scenarios of living in an automation-first world, and how to ensure technology makes our relationships richer.

You wake up, get ready, and hop on the computer to start your remote job. As a customer service manager for a driverless taxi company, your job is to keep an eye on customers getting shuttled to and fro all over the country. The software in each taxi handles 95% of customer interactions, but there are occasionally automated escalations. Even those escalations are handled by a centralized intelligence, but it’s your job to oversee the conversations and make sure everything’s running smoothly.

Your morning is pretty routine. An over-excited father-to-be makes it to the hospital in great time. An irate passenger who refuses to leave the vehicle is transported to the nearest police station. Then the afternoon has an exciting twist in store — a customer demands to speak to a real human. Of course, that’s not out of the ordinary: the system normally handles such situations by synthesizing a new voice and acting like a human. This time, however, the customer catches on to the gambit and continues to demand someone real. After you connect over the line, you learn that the rider is a former employee of the taxi company and knew how to circumvent the system. You’re not 100% sure why they wouldn’t let the system take care of their issue, but you manually modify the cab’s route and then disconnect. The customer seems satisfied.

After work, you order in dinner and start playing an online game. You’re winning pretty handily, but you suspect the game is generating bots that are just slightly worse than you to play. They’re trash-talking like real humans, but the situation feels just a little too tailored to increase your dopamine. You log off when you get a notification on your phone that your food has arrived. You silently grab the bag from the robot at the door and then throw on a movie while you eat.

In all, it’s been a pretty typical day. You head to bed to repeat the cycle tomorrow.

How did the above vignette feel to you? I’m guessing that it felt familiar and encouraging, but probably a bit disturbing. This vision of a day 20 years in the future is very much a possible reality. The technology required for this type of remote work and automation is already being built today and will almost certainly have reached the levels described in the next couple of decades. That’s the encouraging part: we’re headed to an automation-first world where much of the mundane about our world is taken care of for us.

But it also felt disturbing. That’s because all of the small human interactions that we experience on a day-to-day basis have been stripped out, replaced with software. And to make matters worse, in the story you’re not even sure whether you’re talking to a robot or not.

This story presents a common fear about an automated future: the human interactions and relationships that are necessary for us to thrive may be taken away, with nothing meaningful taking their place.

But that’s just one possible future. Let’s take a look at another.

You wake up and get ready, thinking about what you want to do with the day. You decide to head into the office; your company is remote-friendly, but you like to head into the local office once or twice a week to catch up with folks. There was a new episode of the tenth Game of Thrones spinoff last night and you’re excited to talk with some work friends about it.

You hop in a driverless taxi — one of your company’s, of course — and your phone prompts you to give your mom a quick call. It’s been a week since you’ve chatted and she likes to make sure everything’s going okay. You spend the 15-minute ride catching up with her and the latest gossip from home.

Once you’re settled in at the office, you start taking cases. The software in the cabs handles the vast majority of the interactions, but there are some situations that benefit from a human touch. Sometimes people need help with something and they’d rather talk to a person. Other people have indicated they like interacting with people on their profile and your company likes to surprise them with friendly human chats on some of their rides. Your job is to take over for the software in these situations.

You feel a bit tired in the afternoon and switch yourself into introvert mode. Now, rather than handling the direct customer interactions you’re just keeping an eye on the automated systems to make sure everything’s going well. You have to tweak a behavior here and there, but overall the system takes care of itself. You like to mix up your activities; it keeps the work interesting and allows you to work best with whatever mood you’re in. After work, you grab a drink with a group of folks from the office. While you’re out, you get a notification on your phone that a woman in the group is new to the office and has indicated she’d like to get to know everyone a bit better. You feel a bit awkward, but decide to go for it and find her couple of tables over. She seems grateful at your invitation to grab dinner. The dinner is pleasant; there don’t seem to be romantic sparks, but you think she could be a good new friend in the office.

On the way home you get a notification that a friend from college watched a new movie online. You decide to give it a shot when you get home. If nothing else it’ll give you an excuse to reach out and catch up. After the movie and your text to your friend, you head to sleep, looking forward to tomorrow.

Okay, so maybe this isn’t the promised future of flying cars and eternal bliss for everyone. But hopefully it doesn’t sound that bad. And again, this is very much a world we’re headed to in the next couple of decades. In fact, there’s no real different in the fundamental technology that enables either this story or the dystopian one up top. Instead, the main deviations lie in choices: specifically, the choices that our society makes about what we want to do with the opportunity that comes from automation and intelligent software.

How to ensure technology makes our relationships richer